Bionic Ears Market: A bionic ear is an electronic device that is designed by electrically stimulating nerves in the inner ear of deaf patients to produce hearing sensation. It consists of a receiver-stimulator implanted below patient’s skin behind the ear and sound processor. These processors stimulate the inner ear’s nerves which send signals to the brain where these signals are interpreted as sound. The bionic ear is beneficial for people who are suffering from severe, profound or total loss of hearing. 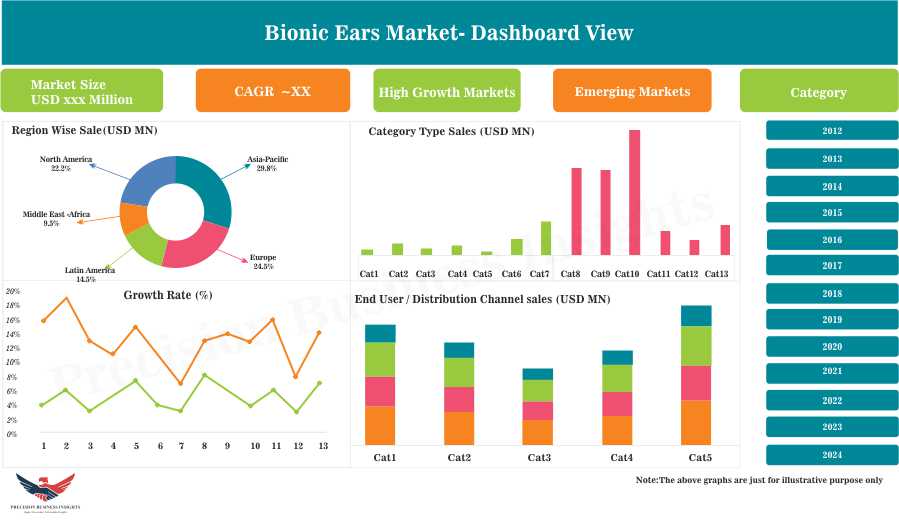 In the geriatric population, there has been a rapid rise in the prevalence of hearing disorders that will fuel the growth of bionic ears market. Hearing disabilities caused in new-born babies is a major cause of concern. Bionic ears are used to aid infants with hearing disabilities. Other factors such as availability of better infrastructure, better diagnostic facilities, increase in awareness among the population, and technological advancements in the field of bionic ears have positive influence on the market growth. Fear of malfunction of these devices and high cost associated are restricting the growth of bionic ears market. Furthermore, regulatory requirements for bionic ears also hampering the growth of the market.

On the basis of device type, global bionic ears market can be segmented into:

On the basis of the end -user, global bionic ears market can be segmented into:

Standard hearing aid devices work by amplifying sound, but it is only useful for people with the partial loss of hearing not for people who are deaf or have profoundly impaired hearing. Loss of hearing is associated with the damage or other abnormalities in the tiny sensor hair cells present inside the cochlea or inner ear. To overcome such conditions bionic ears are used. Bionic ears market is expected to show considerable growth over the forecast period. As per WHO, more than 360 Mn people are affected by loss of hearing disability globally. Loss of hearing is one of the leading global disorder. According to the Royal National Institute for Deaf People (RNID), the prevalence rate of hearing disorder is growing with the age, which is affecting about 70% of people over 70 and 42% people over 50.

Geriatric people are highly susceptible to loss of hearing that can affect their social life. Due to this factor, bionic ear market is expected show significant growth. Untreated loss of hearing among newborn can affect their entire life. As it can lead to impairment in speaking and affect their psychological abilities. But due to technological advancement and development of bionic ears, it is now possible to help these children.  Also due to increasing awareness and better diagnostic facilities to detect the problem number of cases are being registered among newborn children. Research institutes such as Bionics Institute are aiming at improving the performance of bionic ears and function of hearing nerves.

Based on the geographical regions, global bionic ears market can be segmented into North America, Europe, Latin America, Asia-Pacific, and Middle East & Africa. The largest share in the bionic ears market is held by the North America. It is mainly attributed due to the better diagnostic facilities and increase in awareness among the people about hearing disorders in this region. Europe and Asia-Pacific stand next to North America this is mainly due to the large patient population, vast technological advancements in bionic ears, and increase in income of the individuals. Countries such as China, Japan, and India in Asia Pacific and Germany, the U.K., Italy, Spain, and France in Europe are at the forefront of the market growth in these regions.